Have you dreamed of what it would be ...

Aquila Bird Flight Simulator lets you experience soaring bird flight using virtual reality.  It was originally designed for the Oculus Rift, but has now been modified for OpenVR.  You embody one of three species of eagle flying over either Northwest Scotland, a part of Colombia, or Graham Island in British Columbia. This is designed as a relaxing soaring flight simulation, and is not arcade-style flight, and as such you can make use of ridge lift and thermals.  If you want a work out try flapping with motion controllers!

Aquila is currently in development on the PC platform using the Unity Engine.  There is an Early Access version on the Oculus Home store, and the OpenVR version is available on Steam. 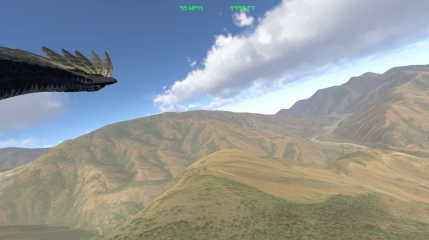 Come and say Hello on our Discord channel here: https://discord.gg/cmeNm4r9bQ

Aquila began as an dream more years ago than I care to think about, and I never thought that technology would progress to bring it in to reach of amature programmers such as me.  With the discovery of the Unity engine, and the Oculus Rift VR headset, I realised that I could begin to give the dream wings.

Using Unity and C#, much time, tutorials, experimenting and tinkering, Aquila began to take form.  Using a customised flight engine, a day/night system, terrain analysis, and lots of sleepless nights, the possibilities of Aquila became apparent and the simulator was advanced enough to demonstrate.  It has been demonstrated at the Hawk Conservancy Trust Wings event 2016, The National Centre for Birds of Prey Helmsley, and finally as part of the IET stand at Fairford Royal International Air Tattoo in 2016, 2017 and 2019.  This simulator has been paired with the Oculus Rift CV1, Oculus Touch motion controllers, the Next Level Motion Platform V3, and a standard room fan (!), to create a complete experience in order to facilitate fund raising for bird of prey conservation.  It is capable of control with the head only, to enable differently abled individuals to experience flying like a bird in a safe environment.  Using Motion Controllers, with both Oculus and Vive wands tested, you can fly using your arms as wings to flap, steer, and dive!

The complete set-up is available for hire for your own event, with everything above expenses going towards raptor conservation.  Please contact me for further details.

So, what is there right now?

- and the Harpy eagle.

- Multiplayer! Currently under test on both versions. Event details are published on the Steam store page. Oculus and Steam versions are cross-compatible in Multiplayer. Watch the trailer below for a little demo of multiplayer. :)

- Simulation of an 8kg bird with a 2.5m wingspan. (cosmetic difference only at present, although they all flap differently).

- Day/Night cycle using Enviro.
- You have thermals and ridge lift to make flying easier.
- Configurable wind direction and speed, shown as 'dandelion seeds' in-game.
- Free looking in VR, along with selectable views on the birds back and a chase view.
- You can land and take off, walk around on the ground, and land in Trees! You can also catch fish!
- Options to start in the air, on the ground, or in a tree.
- Narrated Tutorials for all steering methods.
- Comfort mode:  This levels the camera, and limits your pitch and roll to produce a more comfortable experience.  It is on by default, but can be turned off.
- Some relaxing music to go with the flying.  You can turn it off, if you want to use your own. :)
- Observer mode: The in-flight menu allows you to select a view that is displayed on your main pc screen while you play in VR.  This can impact performance, but allows people not playing to watch your flight.  The videos below show a variety of things you can find in the demo, including the observer function.
- Non-VR ... the Steam version will run without a VR headset.  You can still fly and have a selection of views, and I have tested up to 4k.  It looks nice, but not as immersive as with a virtual reality headset of course.

- The show version uses the Next Level Motion Platform V3 with the full cockpit and a Samsung LCD television for spectators, while the player uses the Oculus Touch and motion controllers. Please note motion platform support is *not* included in the version available on Oculus Home or Steam at this time.

What bugs and issues are there?

- Satellite photography is best experienced with a bit of height.  The illusion will not work when you're near the ground.  I hope to address this in the future using World Creator.
- If you look behind you, the game will try and adjust your view so you look down your side.  However, ultimately, if you intentionally move your head to defeat that compensation, you can look through yourself!  I can't stop you.
- You can't currently 'trim' in pitch, although you can fly just fine without.
- Observer mode does not output sound to your normal pc speakers, if you are using the Oculus Rift headphones.  You need to change your settings on the Oculus software to enable sound mirroring, or whichever output option you wish.

- Oculus Touch and HTC Vive are prone to problems with bright UV light, and requires a solid sensor setup.  The flapping motion required with Oculus Touch requires your sensors to have a good view of your complete motion, or it may not work correctly.

- Unity personal edition 2019.4.30f1, with the Oculus SDK and the current SteamVR release.

- (PARTWAY THERE) More dynamic landscape with things to do of course (challenges).
- Trophy/achievement support (the Steam version has some already).
- (PARTWAY THERE) Maybe one large landscape, or many smaller ones. Next on the list is to add more ground detail.
- Possible survival simulation including weather, defending your territory, nest provider, etc.
- Special needs access (head steering is the start of this).

Here is a selection of videos from my YouTube channel showing the simulator in action.  My channel can be found here:

Aquila Trailer from December, describing the main features of the game itself:

An extended gameplay video from Summer 2020, after completing work on the new landscape and bird models:

The Next Level V3 motion platform in action, kindly filmed by my wife!

A festive season feature, where Santa's sleigh can be pursued for the chance of a reward:

Finally, after getting frustrated with all the Covid-19 stories in the press, I trialed a feature new (at the time) view that is now in the current release. You can enable it by selecting "HR Headset View" in options, then an observing player can press O to select this view, or U to cycle the "HR Headset View". Pressing O repeatedly in a multiplayer game watches random players.  This view watches a player bird from the point of view of a spectator on the ground with a zoom lens:

Thank you for taking a look at this website.  Aquila is still heavily in development, but has reached a point where it is show ready, proven by several successful showings at various events.  Supporting Aquila has already helped real world birds of prey and a number of associated conservation programs across the world.  Please contact me if you have any questions or queries.  Details on how to reach me are on the Contact page.